The human brain and central nervous system are some of the most complex objects in the known universe, dense networks of neuronal and non-neuronal (glial) cells essential for normal bodily function and higher thought. Neurons are highly social cells that physically extend processes/projections called axons and dendrites, known collectively as neurites, to communicate with thousands of other neurons.

When developing, either in vivo or cultured in vitro, neurons produce many new neurites through a process known as neurite outgrowth, where neurites will extend away from the cell body depending on guidance cues, which can be biochemical (endogenous growth factors from other cells, or pharmaceuticals) or physical (other cells or neurites, or walls/channels in microfluidic devices). Neurites grow to form networks with other cells and will extend until a connection is made, as seen in Fig.1. 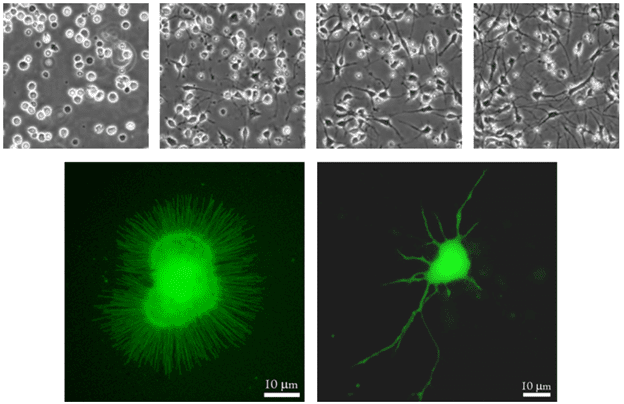 Figure 1: Images of neurite outgrowth. The top row of images shows neurons just after plating, and then at daily intervals, with increasing neurite outgrowth at each stage. The bottom row shows a newly cultured neuron (left), and the same neuron after a few days culture (right) with neurites present, the longest neurite being the axon (both images from Piku4chemia, WikiComms).

Analysing how this process works is vital for understanding the structure and function of the brain and nervous systems, both physiologically and pathologically, especially for neurodegenerative diseases such as Parkinson’s and Alzheimer’s.

Neurite outgrowth is a widely used assay to study neuronal development/degeneration in vitro, with outgrowth stimulated or inhibited by the addition of different factors or potentially toxic chemicals. These assays characterise and measure neurite formation, direction, density, composition, and behaviour in response to these different growth conditions.

Effective assays segment and quantify the outgrowth process, often in the following order:

In addition to culturing cells in typical well plates, there are a range of assays based on microfluidics, which can spatially control factor delivery and can even isolate neurites from cell bodies using micro-channels, where the cells remain in one compartment and neurites grow into another, for easy analysis.

With some well plates offering up to 1536 wells, a huge range of chemicals can be tested at different concentrations to determine their effect on neurite outgrowth, whether positive or negative. This is invaluable as a pre-clinical method to accelerate drug discovery, determine drug safety, and model certain diseases that influence neuronal health and longevity. With clinical trials for neurological diseases often being time-consuming without many positive outcomes, it is vital to have this kind of pre-clinical work to filter out good candidate drugs, compounds, cell therapies, and neuroprotective factors.

This kind of acceleration is achieved with high-content experiments, where thousands of conditions can be tested within an efficient timeframe. This requires tight design at every step of the assay, from cell culture conditions to the maximum speed and field of view of the imaging system. Multiplex setups allow for analysis of multiple variables per experiment, and rapidly-acting fluorescent labels allow for each set of images to be acquired faster.

Historically, image analysis of neuronal cultures has been challenging, due to the stark differences in intensities and morphologies of various neuronal subtypes. Segmentation and subsequent analysis is also limited by computational power, as image processing is computationally expensive. Newer artifical intelligence-based methods including machine learning and deep learning are helping to accelerate iamge analysis in neurobiology, free of the pitfalls of previous image analysis methods.

Neurite outgrowth is an essential measure of neuronal health, and can be used as a marker to determine the effects of different biochemical, pharmaceutical and physical factors. With thousands of candidate drugs at pre-clinical stages, researchers can apply different concentrations of these chemical compounds to hundreds of separate neuronal cultures, and quantify the effects on neurite outgrowth with image and/or molecular analysis.